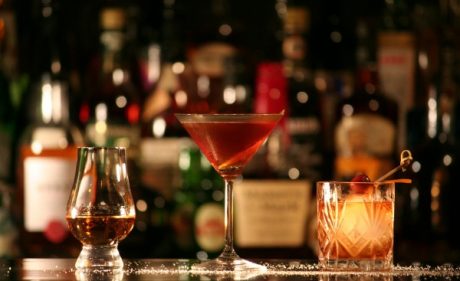 Coming to a Cocktail Bar Near You: Mexican Fernet

Jake Lustig might have noticed the drink in a scuffed-up old bar in Guadalajara, a taverna called Los Famosos Equipales, the kind of place where tourists rarely go. Maybe it was the Nalga Rosa, or Pink Ass Cheek: rum, vodka, grenadine, orange Fanta, and three or four drops of something black like coffee, in a tall bottle fitted with a dribble spout. He asked to take a look and there it was: Fernet-Vallet, a bitter aperitif distilled in a suburb of Mexico City called Santiago Tulantepec, under a French name. He thought, Mexican Fernet, very cool. And later: How can I get this into the U.S.?

Lustig is national sales manager for Haas Brothers, a liquor merchant and importer based in San Francisco. He’s traveled a lot in Mexico, starting in the mid-’90s, but he’d never heard of Mexican Fernet. But once you know about a thing, you tend to see it everywhere: Lustig realized that Fernet-Vallet had been there all along, in the old bars of Guadalajara and Mexico City, its wincingly amaroidal taste the ground wire for neon highballs like the Nalga Rosa, blends of bottom-shelf liquor and sugary pop, the things ordinary Mexicans drink. “It’s amazingly ubiquitous,” Lustig says.

Of course you know Fernet-Branca, distilled in Milan, a toss-back shot with a cult aura here in San Francisco. As a category of sprits, Fernet is a digestive, an extraction of multiple spices, some herbs, and a rhizome or two. It’s literally medicinal, a 19th-century cure for a stomachache. Vallet is smoother than Branca, lacks the latter’s blast of peppermint oil and breathes baking spice, though it’s just as antiseptically bitter. And it has the color and viscosity of boiled-down balsamic.

Epic saga short, Lustig eventually persuaded the Vallet family to allow him to import Fernet-Vallet, along with their angostura bitters. The Vallets have distilled Fernet since the 1860s, when Napoleon III was trying to make Mexico a protectorate of France’s colonial empire. Fernet-Vallet arrived here last summer, and it’s started to percolate up through cocktail bars in New York. It’s caught the attention of a subset of LA mixologists, guys, Lustig says, “interested in developing Latin cocktails beyond the margarita and the daiquiri.” I noticed Mexican Fernet a couple weeks ago on the menu of little Nido in Oakland, California, where it’s set up as a shot with a beer.

That was right after I saw a tweet by Jonathan Gold, four words expressing the sense of discovery Lustig must have felt in that Guadalajara taverna: “Mexican Fernet? Who knew!” Patrons of American cocktail bars are about to.

Permalink: Coming to a Cocktail Bar Near You: Mexican Fernet
Published on Tuesday, January 29, 2013